Afrobeats Now has its Own Official Chart in the UK

In recent years several African artistes and more have picked up the mantle from Afrobeat pioneers to influence the genre within Africa and worldwide.

The UK’s Official Charts Company has announced the launch of Britain’s first-ever Afrobeats singles chart. According to the announcement, the new Top 20 weekly spotlight artists include Burna Boy, Davido, Wizkid, Mr Eazi, Tekno, Naira Marley and Rema making strides in the Afrobeats scene in the past 12 months in the UK. 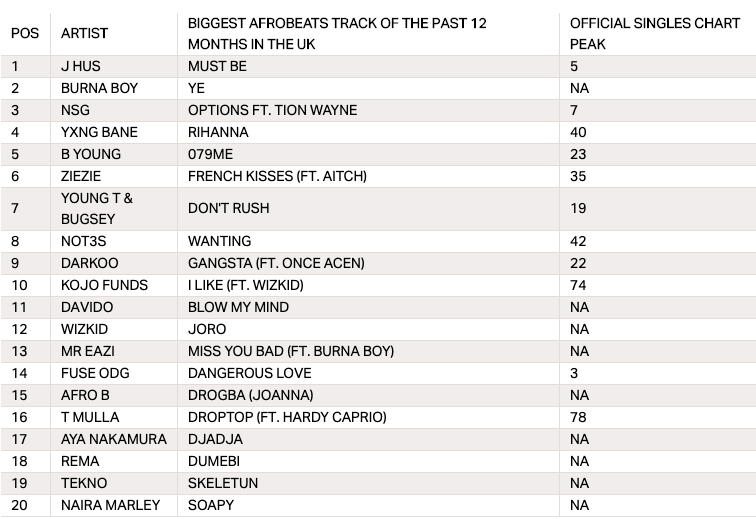 British rapper J Hus heads up the power list, as he lands his first Number 1 on the UK’s Official Albums Chart, while Burna Boy is in second place, according to Official Charts, his biggest Afrobeats track of the period is “Ye“, and Hackney six-piece NSG place third on the ranking, their biggest hit of the year is Top 10 single “Options” featuring Tion Wayne.

The inaugural chart will be unveiled in a special The Official UK Afrobeats Show on BBC Radio 1Xtra on Sunday, July 26, featuring a range of hosts and artists from around the world. According to Mark Strippel, Head of Programmes at BBC Radio 1Xtra, the Afrobeats chart was “long overdue.”

He said, “1Xtra has been committed to championing the Afrobeats scene since our formation and we’re excited to support the launch of the first-ever UK Afrobeats Chart”.

It has been amazing to witness over the past decade the sheer growth in African music being welcomed by the UK and the international market. A scene that defines a culture, a people and countless generations, its music has soundtracked underground culture for years, being the go-to sound in clubs, parties and communities in a way that’s shaped our very culture.

For too long, Afrobeats artists have had to work tirelessly to get their voices heard and now African music/Afrobeats is finally being seen as a leading sound that global superstars turn to on a regular basis.

The Official UK Afrobeats Chart will help open up the culture to new audiences, giving emerging artists the opportunity to be heard whilst celebrating the sound of a continent that has gone global. Its importance can’t be measured and I look forward to celebrating the biggest and best tracks each and every week

Davido’s hit single, “IF” is now a certified “Gold” record holder in the United States with the Recording Industry Association of America (RIAA) dropping...